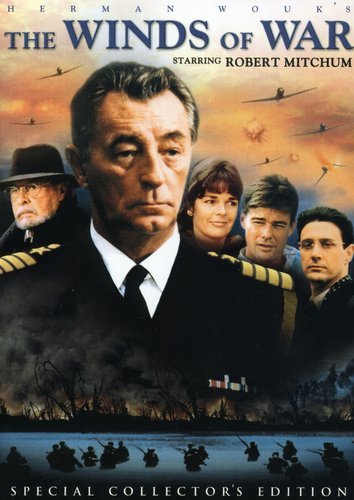 Set against the backdrop of world events that led to the Japanese attack on Pearl Harbor in 1941, The Winds of War stars Robert Mitchum as Victor "Pug" Henry, a career naval officer who along with his family, learns to navigate the waters of his dangerous times in the late 1930s. While Germany expands and proceeds to seize several border countries, Italy attempts to establish a Fascist Colonial Empire under Mussolini and Japan prepares for a major battle with China. Meanwhile, the Henry clan finds itself drawn into the center of the conflict as they deal with the drama, romance, tragedy and heroism that lead to America's involvement in World War II.

An engrossing, 1983 television miniseries based on a bestselling work of historical fiction by Herman Wouk, The Winds of War is an admirable production reminiscent of the era of Hollywood's epic features. At the center of the globe-trotting story is the Henry family, whose laconic but straight-shooting patriarch is United States Navy Commander Victor "Pug" Henry (Robert Mitchum), sent to Hitler's Berlin in the spring of 1939 as a naval attaché to the then-neutral American embassy. A keen observer, Pug deduces that Germany is not preparing for war on two fronts (western Europe on one side, Russia on the other) despite what the Nazis want the world to believe, meaning that Hitler must be working out a secret peace deal with Stalin. Pug's prescience makes him a favorite eyewitness in Berlin for Franklin D. Roosevelt (Ralph Bellamy); the irony is that Pug is far less sagacious when it comes to the realities of his family.

Polly Bergen plays unhappy wife Rhoda, who turns to A-bomb developer Palmer Kirby (Peter Graves) for comfort. Pug's 19-year-old daughter, Madeline (Lisa Eilbacher), defies her iron-willed dad's decision that she stay in school by taking a job for CBS radio in New York. Compliant son Warren (Ben Murphy) can't seem to get Pug's attention despite doing everything right (including becoming a Navy pilot, eventually present at the bombing of Pearl Harbor). By contrast, Pug spends more time fuming over black sheep son Byron (Jan-Michael Vincent), who is working in increasingly Fascist Italy as an assistant to an art historian (John Houseman) while trying hard to woo the latter's exasperating niece, Natalie (Ali MacGraw). The story of Byron and Natalie takes up much of The Winds of War as the pair traverse Poland during the shock of Hitler's 1939 assault, and Jewish Natalie later finds herself trapped inside Italy facing the threat of concentration camps. Before The Winds of War ends, each of these characters will end up in places and situations, and with historical figures (Churchill, Mussolini) as well as ordinary people, they would not have anticipated outside the pressures of war. The program's length and smart script allow for a lot of ideas and background detail that pull a viewer in--happily. --Tom Keogh

Top Categories Of The Month

Christmas Gifts Save Up To Half Price

Experience the Fast and Secure shopping with our App.